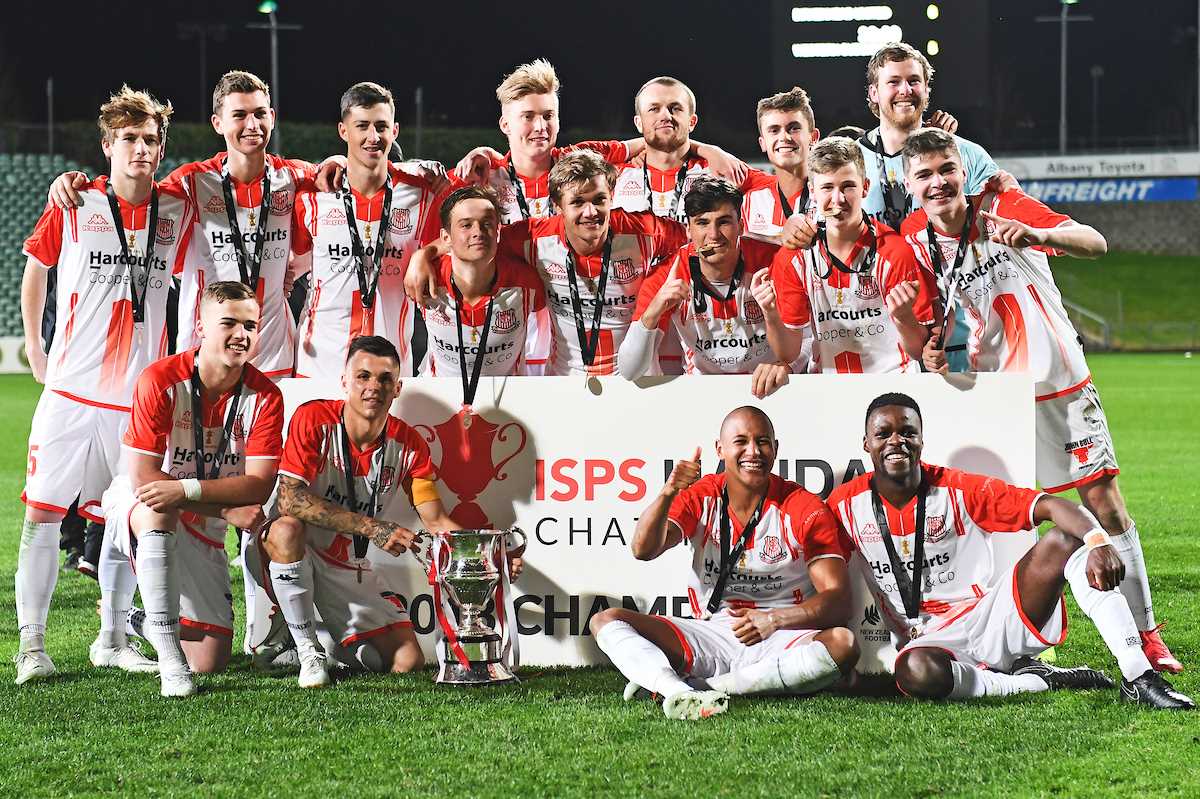 A packed grandstand leapt almost as high as Andy Coburn when he headed the opening goalCoburn crashes through … in Dunedin Technical’s 2-1 Chatham Cup win at the Caledonian ground yesterday.

Coburn and Chidley celebrateThe powerful midfielder rose above three Miramar defenders to power the ball past keeper Dylan Hall in the ninth minute, and went on to play his best game for some time.

Wellington struggled to get its passing game going in the face of a totally committed Technical team effort, urged on by coach Mike Fridge on the touchline.and – its a GOAL !

Youngster Tristan Prattley showed his pace and commitment in early dashes up the left wing, and leading the Dunedin attack, targetman Richard Smith showed springheeled athleticism as well as composure on the ground.

Ross Mackenzie gets stuck in…But it was in the ‘boiler room’ that Technical excelled. Coburn and Ross Mackenzie tackled hard and rarely gave the ball away, pushing passes forward that kept Miramar on the back foot.

Also solid in defence, centrebacks John Chisholm and Blair Scoullar snuffed out any danger, giving keeper Nick Tarrant an armchair ride for most of the match.

It was yet another attacking run by Riki Chidley that produced the cross that gave Smith a chance to use the heading ability that has netted the Rich Smith celebratesstriker many goals in his career.

Timing superbly a run across defenders, Smith launched a glancing header that was still accelerating as it hit Miramar’s net in the 18th minute.

The goal stunned Miramar which had enjoyed an unbeaten streak of eight matches without defeat, but it also seemed to rob Technical of some intensity, and play became more ragged.

Nick Tromp scoresDanger signs were posted as Miramar launched a few freekicks, and just as the Dunedin bench was urging caution as halftime approached, it was Miramar that climbed back into the game with a well taken goal.

Nick Tromp had already made some elusive runs, and heNick Tromp did well to get in behind defenders at the far post and head a 43rd minute goal.

The game’s intensity became white hot in the second half as both side’s saught supremacy. Referee Allan Martin flashed yellow cards at Mike Flaws and Coburn after robust tackles.

Coburn was stomped on the chest in a tangled tackle, and a volatile overhead kick by Aaron Burgess nearly felled a Miramar defender.

Both coaches, Fridge and Miramar’s Graham Little became more animated as the tension increased and both sides opted for pumping Burgess rides tackleballs into the box.

Dunedin’s biggest scare was when Miramar’s Rowe found space to almost get on the end of a well delivered cross – where to make contact would have produced the equalizer.

However referee Martin’s whistle eventually blew, to the relief of over a thousand Dunedinites in the stand, who immediately were discussing the prospect of two South Island teams in the Cup Semi Finals, since Nelson United beat Western Suburbs.

Other Semi Finalists who will play on 16-17 August, are East Coast Bays, after slamming Waitakere United 6-nil, and Glenfield Rovers who upset Central United 3-2.